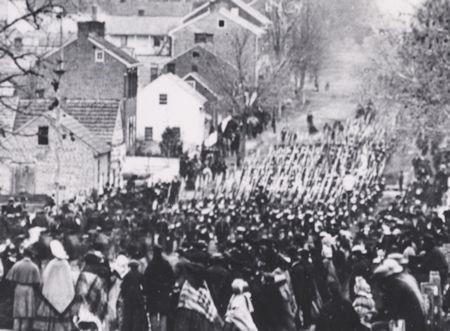 • Authentic sharpshooters’ nest in the attic - where two Confederates died

• Used as a hospital - medical supplies found hidden in house

The Shriver House Museum is a lasting reminder of how the Battle of Gettysburg affected the residents of this south-central Pennsylvania town. The fully restored home of George Shriver is one of the most visited sites in Gettysburg. To enter the house today is to step back in time to see what life was like before the Civil War altered the Shrivers' lives forever.

George Shriver is a descendent of one of the oldest and wealthiest families in Adams County. The Shrivers' large family farm produced vast quantities of liquor which led George to open Shrivers' Saloon & Ten-Pin Alley. 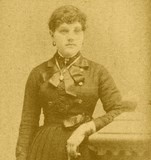 Henrietta “Hettie” Weikert also came from a prosperous family. Her father, Jacob Weikert, owned a large farm at the base of Big and Little Round Tops.

In 1860, as serious talk of a Civil War was captivating the country, George and Hettie Shriver were building their new residence/business in Gettysburg. The family would occupy the finely-appointed first and second floors. The lower level would house George’s business, Shriver’s Saloon & Ten-Pin Alley. The two-lane ten-pin bowling alley was situated in an enclosed structure to the rear of the house.

Numerous bullet holes are visible on the south side of the Shrivers’ home. A silent reminder of the struggle between the Union soldiers at the base of Cemetery Hill and the Confederates sharpshooters who occupied the Shrivers’ home during the battle.

Confederate sharpshooters commandeered the Shrivers’ home during the battle to fire at Union troops on nearby Cemetery Hill through two loop holes knocked through the south-facing brick wall. A CSI police detective, using a luminol-like chemical, confirmed the presence of mass quantities of blood in the area where it is known at least two soldiers died during the siege.

The garden behind the Shriver’s home is an example of a four-square garden in the mid-19th century. This ‘town garden’ provided fruits and vegetables for the family as well as medicinal herbs for home remedies meant to cure a variety of afflictions.

In 1996, after sitting abandoned for nearly thirty years, the Shrivers’ home was privately and meticulously restored to its 1860s appearance. Hundreds of items were found during the restoration including letters, toys, corset stays, paper dolls, eyeglasses, jewelry, gas lamps, and much, much more. The most historically relevant were six Civil War bullets (three still containing black powder) and medical supplies. The most poignant was one child’s shoe. A custom of the time called for placing a shoe inside the wall of a house during construction to bring good luck to the future residents.